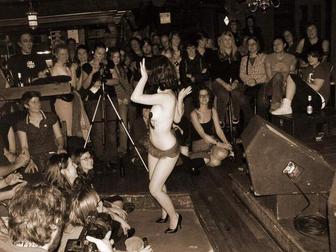 A 2012 inductee to the Canadian Burlesque Hall of Fame, Miss Cadence has been dubbed the "Maritime Queen of Burlesque." She is the founder of Halifax's Pink Velvet Burlesque Troupe (est. 2006), a makeup artist, a model, and an entrepreneur extraordinaire! After her start with the Halifax Burlesque Society in 2004, she quickly became a rising star in Eastern Canada both as an innovative producer, and a notable performer.

In 2012 Miss Cadence produced the Great Maritime Burlesque Tour, a multi city route which made history when it brought Burlesque to Prince Edward Island for the very first time, causing patrons to queue around the block and selling out The Guild theatre in the heart of downtown Charlottetown. Video: youtu.be/0F_whPx6c64 In 2013 she joined the Great Canadian Burlesque troupe in Toronto, Ontario and performed at that years’ Great Canadian Girlesque Expo with an international line up of talent that featured industry pioneer and legend Tempest Storm. Video: youtu.be/NPJYGOItedY

In 2014 she relocated to Hamilton, Ontario where she produced or performed in several productions including Pop-Up Hamilton, at Auntie Boom’s cafe, at Porcelain Records Studios, and at other private events locally, before taking time off to become a proud mother of two. In 2016 she returned to the scene after her colleagues were fined by the city at a local show. In response, she founded the Hamilton Burlesque Society as a platform to help the burlesque scene of her adopted hometown grow and rebuild. It was under this banner that Miss Cadence assisted in amending the city’s bylaws to not only accommodate, but to celebrate this nostalgic and innovative artform, giving it an entertainment classification of its own: Press: cbc.ca/news/canada/hamilton/burlesque-hamilton-laws-1.4740962

Miss Cadence has performed in hundreds of shows bringing her unique charm and love of classic burlesque to the stages of Canada and the USA including Hamilton, Halifax, Toronto, Montreal, New York, and Boston. She has appeared in domestic and international print magazines & newspapers, television programs, music videos, and even had roles in Canadian films “The Trailer Park Boys Movie” (2006) and “Hobo with a Shotgun” (2011).

As a strong supporter of up and coming talent in the community, Miss Cadence is passionate about nurturing and mentoring new performers. She became a burlesque instructor in 2008 while teaching at Serpentine Studios, Studio In Essence, and Halifax Dance. She later ran workshops in Toronto through the Great Canadian Burlesque Academy and in Hamilton and Burlington at Brass Bombshells studios. She now has her own studio, Creative Heart Space on Main Street East in Hamilton, where she runs an 8-week Burlesque performer development course, one-off workshops, private lessons, bachelorette parties, and girls’ night out events.

In 2018 she returned to the stage and to her role as producer with the feminist-themed theatrical burlesque show “Season of The Witch,” a response to overcoming the burlesque bylaw issues locally and the political climate for women globally. She is currently working on a series of “New Talent Burlesque” shows to foster the redevelopment of the Hamilton burlesque scene from the roots up, while in addition to these amateur events Cadence is in the process of creating two new theatrical burlesque shows set to open in 2019/2020